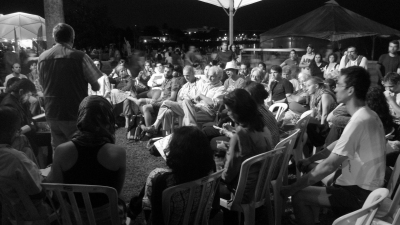 Join a Rio+20-related reflection on

Since the beginning of the global negotiations on sustainable development, their central  thematic concern has changed two times: from ‘environmental protection’ (Rio 1992) over ‘poverty eradication’ (Johannesburg 2002) to ‘the green economy (+poverty eradication)’ (Rio 2012). This means that, for the first time, a world summit on sustainable development will be divided in principle over the theme that needs to inspire and guide the negotiations. While goals such as ‘environmental protection’ and ‘poverty eradication’ may leave as much room for interpretation as ‘the green economy’, there is no evidence or reason for any of the involved actors to be ‘against’ the principle of environmental protection or poverty eradication. In contrast, although the discourse on the meaning of the principles and practices of the green economy is enriching, one notices still today a polarisation around the potentials of and the strategies behind the idea of the green economy. What is a progressive ‘motor’ or ‘tool’ for environmental protection, prosperity and even social justice for the one is nothing more than a way to strategically embellisch the continuation of a neo-liberal capitalist and unsustainable agenda for the other. The gap between the two visions becomes even deeper when the question is phrased as whether for that economy to become green, it should be done by more or by less economic growth. The risk is not negligible that, with this metacriterion consciously or unconsciously referenced in scientific, economic, social or political ideas and arguments, the  negotiations in the frame of the 2012 World Summit remain stuck over conflicting evidences instead of reaching a consensus on a way forward supported by a joint understanding of ‘the green economy’ as a criterion for sustainable development.

Is that risk to be taken serious? Is a consensus understanding of the principle of the green economy necessary for global sustainable development governance? And, if yes, how will the global society succeed in transcending the polarisation over that principle?

Join the discussion at the site of the “The Possibility of Global Governance” project here.