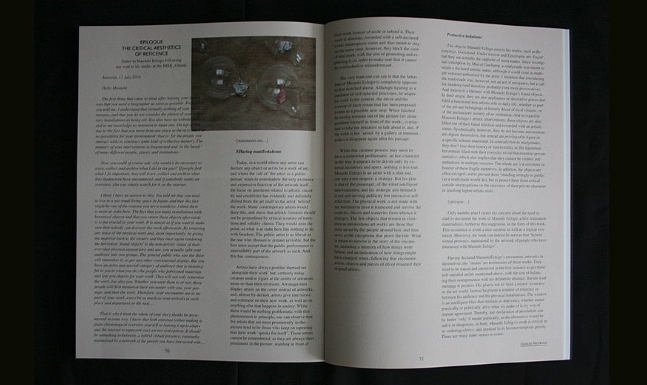 Epilogue – the critical aesthetics of reticence

[letter to Masashi Echigo following my visit to his studio at the HISK, Ghent]

The first thing that came to mind after leaving your studio was that you need a biographer as soon as possible. From what you told me, I understand that virtually nothing of your work remains, and that you do not consider the photos of your temporary installations as being art. You also have no website or blog, and to my knowledge no intention to make one. On top of that, due to the fact that you move from one place to the next, there is no possibility for your environment (that is: for the people you interact with) to construct some kind of collective memory. The memory of your interventions is fragmented and ‘in the hands’ of many different people, places, and institutions.

I think I have an answer to this. You told me that you used to live in a too-small living space in Japan, and that this fact might be one of the reasons you are a wanderer. I think there is more at stake here. The fact that you make installations with borrowed objects and that you return these objects afterwards is to me crucial in your work. It is almost as if you want to make sure that nobody can discover the work afterwards. By removing any trace of the physical work and, more importantly, by giving the material back to the owners and thus once again rendering the borrowed ‘found objects’ to the non-artistic status of their everyday physical appearance and use, you actually split your audience into two groups. The general public who saw the show will remember it, as per any other conventional display. But you have an extra and special category of audience that is meaningful to you in what you do: the people who fabricated materials and lent you objects for your work. They will not only remember the work, but also you. Whether you want them to or not, those people will first memorise their encounter with you, your passage, and then the work. Therefore, your encounters are to me part of your work, every bit as much as your arrivals in each place and departures to the next…

That is why I think the whole of your story should be documented in some way. I know that both extremes (either making a plain chronological overview yourself or leaving it up to others and the internet to represent you) are not real options. It should be something in-between, a hybrid virtual presence, eventually maintained by a network of the people you have interacted with…

Today, in a world where any artist can declare any object or act to be a work of art, and where the cult of ‘the artist as a public person’ tends to overshadow the very existence and expressive function of the artwork itself, the focus on questions related to artistic sincerity and credibility has evidently and definitely shifted from the art itself to the artist ‘behind’ the work. Many contemporary artists would deny this, and stress that artistic freedom should not be jeopardised by critical scrutiny of intentions and validity claims. They would miss the point, as what is at stake here has nothing to do with freedom. The public artist is as liberal as the one who chooses to remain invisible, but the first must accept that the public performance is unavoidably part of the artwork as such. And this has consequences.

Artists have always profiled themselves ‘alongside their work’ but, certainly today, creators tend to figure at the centre of attention more-so than their creations. Art magazines display artists on the cover instead of artworks, and, almost by default, artists give interviews and comment on their new work, as well as on anything else that happens in society. While there would be nothing problematic with this phenomenon in principle, one can observe that the artists that are most prominently in-the-picture tend to be those who keep on repeating that their work ‘speaks for itself’. Those artists cannot be remembered, as they are always there, prominent in the picture, standing in front of their work instead of aside or behind it. Their work is absolute, rewarded with a self-declared iconic masterpiece status and thus meant to stay. At the same time, however, they block the view of that work, with the aim of promoting and explaining it, in order to make sure that it cannot be overlooked or misunderstood.

The very least one can say is that the behaviour of Masashi Echigo is completely opposite to that sketched above. Although figuring as a mediator of self-selected processes, he adapts his work to the context, the décor and the scenery of each venue that has been proposed to him as a possible next stop. When finished, he mostly remains out of the picture (let alone positions himself in front of the work), is reluctant to take the initiative to talk about it, and, if the work is not ‘saved’ by a gallery or museum, makes it disappear again after his passage.

While this creation process may seem to have a somewhat problematic, ad hoc character in the way it appears to be driven only by external incentives and spurs, nothing is less true. Masashi Echigo is an artist with a plan and, one may even suspect, a strategy. But his plan is that of the passenger, of the silent intelligent interventionist, and his strategic aim behind it is not self-serving publicity but interactive self-reflection. The physical work is not made with the intention to have it transcend and survive the contexts, décors and sceneries from whence it emerges. The few objects that remain in existence as autonomous art works are those that were saved by the people around him, and thus serve as the exceptions that prove the rule. What is meant to survive is the story of the encounter, including a memory of how things were before, and an indication of how things might have changed when, following that encounter, actors, objects and pieces of décor resumed their original affairs.

The objects Masashi Echigo uses in his works, such as Belongings, Grensland, Under Tension and Epistrophe are ‘found’, but they are actually the opposite of readymades. Since its original conception by Marcel Duchamp, a readymade was meant to retain a declared artistic status, although it could exist in multiple versions authorised by the artist. I maintain that introducing the readymade was, however, not an act of arrogance, but a call for modesty (and therefore probably even more provocative). And therein is a likeness with Masachi Echigo’s found objects. In their origin, they are also appliances or decorative pieces that fulfil a functional non-artistic role in daily life, whether as part of the private belongings or homely décor of local citizens, or of the perfunctory scenery of an institution. And in regard to Masashi Echigo’s artistic interventions, these objects are also lifted out of their banal function and rewarded with an artistic status. Symbolically, however, they do not become autonomous art objects themselves, but instead are privileged to figure in a specific solemn enactment. In contradiction to readymades, they don’t lose their history or functionality in this figuration, but remain filled with their everyday trivial but essential private narrative, which also implies that they cannot be created and authorised in multiple versions. The whole act is a ceremony in honour of these fragile narratives. In addition, the objects are often encaged, not to prevent them ‘standing strongly in public’ (as a readymade would do), but to protect them from critical outside interrogations on the relevance of their private character in reaching higher artistic ends.

Only months after I raised my concern about the need to start to document the work of Masashi Echigo, a first realisation materialised, further to this suggestion, in the form of this book. This occurence is to me a nice surprise as well as a logical evolution. Moreover, the book can indeed be seen as that ‘hybrid virtual presence, maintained by the network of people who have interacted with Masashi Echigo’.

Having declared Masashi Echigo’s encounters, artworks in themselves, the ‘stories’ are testimonies of these works. They need to be traced and preserved in the first instance as per those self-satisfied artists mentioned above, with the aim of balancing their omnipresence with his deliberate absence. But the final message is positive. His plan is not to ‘hold a mirror’ to society or the art world. Instead he places a window of reticence in-between his audience and his physical installations. The window is an intelligent filter that reminds us that today, whether meant poetically or politically, art is what we make of it, by way of mutual agreement. Thereby, any declaration of absolutism can be better ‘only’ if meant poetically, as the alternative would be naïve or dangerous, or both. Masashi Echigo’s work is critical in its enduring silence, and poetical in its hesitant temporal gravity. There are many more stories to come.